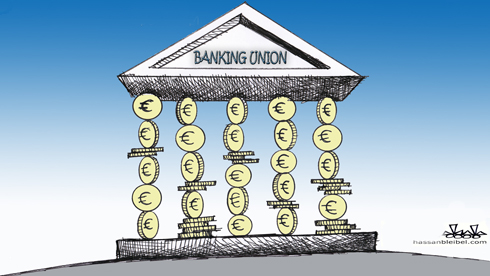 Ognian Hishow (Stiftung Wissenschaft und Politik)
The Banking Union is an EU-level banking supervision and resolution system which revolves around the concept of a single mechanism for the solution of bank crises – the Single Resolution Mechanism (SRM). An improved central supervision should effectively prevent the banking crises from spreading from the countries with bad banking regulation to the countries with good banking regulation. The governments should also be protected against potential costs related to bank bailouts. These should be newly covered by a unified fund designed for a better solution of banking problems – the Single Resolution Fund (SRF), to which all the banks will contribute at the time of economic growth. The redistribution of money will be improved, which should lead to a more efficient bank bankruptcy management in smaller or poorer EU Member States.

The banking system in the eurozone is relatively complicated and there is a heavy interdependence between banks and states. The financial institutions hold a large share of government bonds, while the governments rely on the continuing trend that banks will keep buying these bonds. The Banking Union assumes that this unhealthy relationship must be upended. The costs of bank bailouts or their recapitalization will not be paid by the countries but by the other European banks via SRF.

Unfortunately, it seems that the total volume of 55 billion EUR in SRF will not be sufficient for the new crisis management. The redistribution of funding will not help in such a case, where the crisis hits the large states. As of now, many suppose that Germany and the Nordic states will stay in the position, in which they will be able to absorb shocks caused by potential instability within the eurozone. It is thus necessary for all the banks to improve their balance sheets and financial stability. The Banking Union would otherwise become merely become a safe place for the weaker and less disciplined banks because all risks and burdens will effectively be redistributed towards the stronger and more disciplined banks and Member States within the eurozone.

The cancellation of the implicit guarantees, which were granted to the banks by their respective governments, is yet another step to be undertaken if the interruption of the unhealthy interdependence between the states and their banks is to be effective in the long run. The governments’ guarantees were offered in order to prevent the spread of the fall of the banks at the heights of the eurozone crisis: the banks essentially received a guarantee that the state would not let them fall, which the former often interpreted as that they could engage in riskier behavior, such as speculations in junk bond and stock markets. As a result, with the introduction of safer instruments for the sale of state bonds, the cancellation of the implicit guarantees could lead to a significant change in the banks’ risk-taking behavior.
(The study can be downloaded here:http://www.swp-berlin.org/fileadmin/contents/products/arbeitspapiere/BU_WP.pdf)