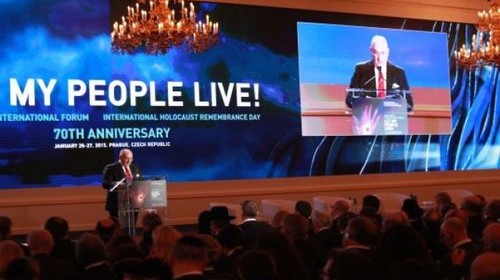 Martin Schulz, President of the European Parliament, commemorated the 70th anniversary of the liberation of the concentration camp in Auschwitz, Poland. Speaking in Prague on the Holocaust Remembrance Day, 27 January, Mr Schulz stressed that “too many allowed hatred to grow, too many turned a blind eye, too many stood silent. We must never allow this to happen again.” At the same time, MEPs and members of the Belgian Jewish community gathered in Brussels to observe a minute’s silence in memory of the millions of victims of shoah, Hebrew for the Holocaust.

Europe is organizing numerous events throughout the continent to mark 70 years since the liberation of the concentration camp at Auschwitz-Birkenau. During the event organized in the Polish city of Oswiecim (Auschwitz), some 300 survivors warned of the present situation in Europe saying “We survivors do not want our past to be our children’s future”. Ronald S Lauder, president of the World Jewish Congress, who also attended the event, told the commemoration that “Jews are targeted in Europe once again because they are Jews… “Once again young Jewish boys are afraid to wear yarmulkes [skullcaps] on the streets of Paris, Budapest, London and even Berlin.”

Mr Schulz, who was speaking at the Prague Castle during a special session of heads of state, pledged shoah survivors that their legacy would never be forgotten “It is upon us to fight for freedom and justice, democracy and human dignity; today and every day.” During another event commemorating Auschwitz liberation, vice-president of the EU Parliament, said that “No Jewish person should be obliged to leave Europe, their Europe, as a result of terrorism. Without the European Jews, Europe would no longer be Europe.” Attacks against Europe’s Jewish community are “threats to our own values and identity,” he added. Mr Tajani’s speech was also a reference to Simone Veil, the first president of the directly elected Parliament, who herself is a holocaust survivor.