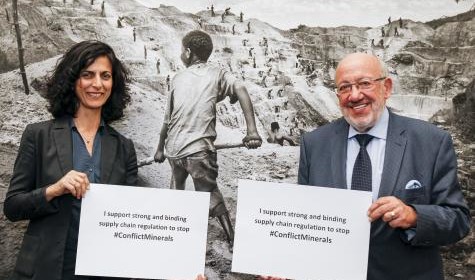 Members of the European Parliament gave their ‘yes’ on Wednesday (20 May) to a monitoring system for natural resources coming from conflict areas. Despite this success, it is expected that further talks with the Commission and the Council will not be that smooth. The new legislation would affect roughly 800,000 European companies that trade with a myriad of “conflict minerals” such as tantalum, tungsten or tin (3T). The European Parliament wants to implement tougher surveillance measures for imports of the problematic minerals to the block.

Under the new rules, affected companies – refiners, importers, smelters, manufacturers – will have to ensure that the revenues from the minerals they import are not used to fund conflicts. The surveillance system particularly targets Africa, which is notoriously known for its “resource curse”. Africa’s Great Lakes Region of the Democratic Republic of Congo (DRC) is especially affected by the problem. In the region, trading chains are convoluted and characterized by low transparency and harsh working conditions. In eastern DRC, trade in 3T was worth $215 million in 2008 and in many African countries, mineral production accounts for about a fourth of gross national product. It is estimated that, for example, the Democratic Forces for the Liberation of Rwanda (FDLR), the primary remnant Rwandan Hutu rebel group in the east of the DRC, are dependent on minerals and uncontrolled trade for 75 percent of their income.

Although the regulation has been hailed a victory by some advocacy groups, it still has a long road to travel. MEPs now have to initiate prompt negotiations with the Commission and the Council to back up the bill. According to Marie Arena of the Socialists & Democrats political group, “the regulation voted through today is a historical victory that puts the respect of human rights above the profit of companies. Europe can become a pioneer the field of ethical economy”. However, opponents of the legislation fear that the new rules might have a negative impact on small and medium-sized enterprises (SMEs) in Europe as well as on legitimate trade of minerals in conflict zones. While trade helps sustain armed groups, it also helps sustain local people. It is estimated that only in the Great Lakes Region, 1 million people directly depend on trade in minerals.