G7 Summit: Greece, TTIP and Environment on the Agenda 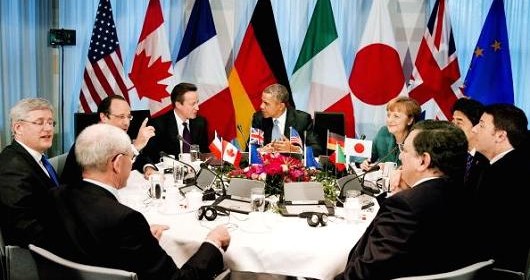 Speaking after the G7 summit in the German Bavarian Alps, Chancellor Angela Merkel warned that the time was running out for Greece to reach a deal and keep it in the Eurozone. She said that she would only show solidarity to Athens if Greece “makes proposals and implements reforms”. The G7 summit took place at Schloss Elmau hotel and was attended by the leaders of the U.S., UK, Canada, France, Japan, Italy, and Germany.

Ms Merkel said that the Greek crisis was high on the agenda and emphasized that it was her desire to keep the country in the Eurozone. The European Union is urging Greece to launch further reforms including cuts in salaries and pensions as well as tax increases, which is a condition for receiving another tranche of the bailout funding totalling €7.2 billion.

The Transatlantic Free Trade Agreement (TTIP) was also on the agenda of the G7 meeting. In an interview with a German TV after the working session, Angela Merkel also said that everyone was working hard on TTIP. She also reminded that much progress had already been made on the Free Trade Agreement between Japan and the United States. “When it comes to creating more jobs, Europe should not be last in line, but should do everything it can to move things forward. We can do it, and we want to have achieved important milestones by the end of the year,” Ms Merkel commented.

In addition to Greece and TTIP, the G7 countries also called for the decarbonisation of the global economy, pledging to wean their energy-hungry economies off carbon fuels and move the current electricity generation towards more greener renewable sources and nuclear energy by 2050. The leaders moreover promised to develop long-term low-carbon policy in a communiqué following the two-day meeting. “We commit to doing our part to achieve a low-carbon global economy in the long-term, including developing and deploying innovative technologies striving for a transformation of the energy sectors by 2050,” the communiqué read.