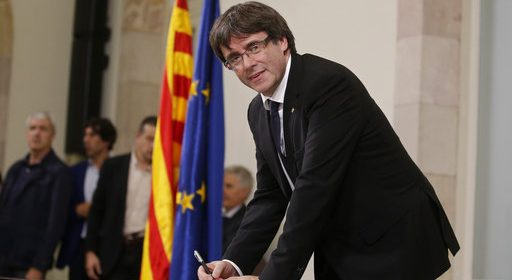 The escalating conflict between Catalonia and Spain is ripe for European mediation. For some time, Catalan government has attempted to internationalize the issue as proven by external mediation. However, Madrid is strongly against mediation, insisting that the conflict needs to be solved by the existing domestic law. Brussels is naturally unwilling to get involved since the conflict is an internal affair of an EU member state. What therefore follows are the four previous conflicts that were soothed by European mediation.

First, the European Commission mediated the Good Friday Agreement in Northern Ireland, both during and after the peace deal. During the process, the EU was playing an active role that was able to add the economic dimension to a largely political process. After the peace agreements were signed, the Commission created the “Northern Ireland Task Force” whose main task was to promote socio-economic development of Northern Ireland within the framework of the EU’s regional policy.

Second, the conflict between Austria and Italy over the Tyrol-South Tyrol-Trentino region was also characterized by the Commission’s socio-economic focus. The creation of a Euroregion helped the establishment of a direct channel for dialogue with Brussels, which in turn enabled a secession movement to be channeled through the European cooperation framework, including cross-border agreements. As in Northern Ireland, the EU’s role was set up by its regional policy, utilizing the legal basis to support a political conflict.

Third – Gibraltar. The case of Gibraltar also demonstrates the Commission’s involvement, who sent a “fact-finding” mission to assess the complaints of malpractice at the borders. The EU executive was involved via the Directorate-General for Home Affairs in the cross-border dispute. The Commission’s presence helped facilitate a deal between the Spanish and UK authorities.

Finally, the EU has been actively involved in the Cyprus conflict. The Commission was present at multiple rounds of talks including the last one in July this year, which, however, did not yield any progress. Nevertheless, in this case, few parallels apply to the conflict in Catalonia. With Turkey not being an EU member state, the Cypriot-Turkish conflict is also mediated internationally under the UN umbrella.

Despite the reluctance in Madrid, Brussels should start playing a larger role in Catalonia given the escalation, although it goes without saying that any initiative would need the approval of both sides. Without preconditions on the main points of this dialogue, the most imminent task of this engagement would be to reach agreement to put an end to the current confrontation on the basis of compliance with a minimal agreement.

(The Opinion can be downloaded here)