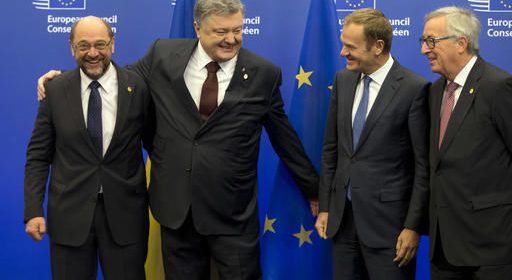 Ukrainian nationals have been granted visa-free travel to the European Union, European Council President Donald Tusk announced yesterday (24 November) during a meeting of Ukrainian and EU leaders in Brussels. Mr Tusk said that Ukraine had met all relevant standards “perfectly“ and the EU authorities would start working on the implementation of the visa-free regime in the upcoming weeks.

The visa-free travel will allow Ukrainian citizens with biometric passports to travel to the countries of the Schengen area – including some non-EU countries such as Iceland or Switzerland but not to the UK or Ireland – without visa for short stays of up to 90 days. However, travellers have to eventually obtain an electronic confirmation prior to their journey similar to the American ESTA. The electronic registration and authorization system is still in the making.

Mr Tusk commented that “The last three years have seen the birth of a new Ukraine that advances its democracy and economy through sometimes very tough reforms. Additional assistance from Europe should help Ukraine in strengthening its democratic path“. He further said that all EU Member States agreed that Ukraine was ready for a visa-free regime and that it would come into force once the European Parliament and the European Council agreed on changes to the block’s visa policy.

The visa-free regime is a great success for Ukrainian President Petro Poroshenko who has been promising Ukrainians visa-free travel to the EU for almost three years. Mr Poroshenko said after the meeting with his European counterparts that he hoped the visa-free regime would happen by the end of the year. Visa-free travel was not the only point on the agenda of yesterday’s meeting. Both sides also extensively discussed corruption, which has been not been tackled successfully.