Alone in the Desert? – How France Can Lead Europe in the Middle East 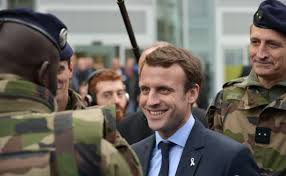 The Middle East and North Africa (MENA) region holds a special place not only in France’s foreign policy, but also in its society, politics, history, and culture. This was evident in the 2017 presidential campaign, when the debate about the region was sharply polarized. Since his eventual victory, Emmanuel Macron has only confirmed this, giving a central role to the Middle East in both his early foreign policy speeches and his specific initiatives. The ongoing, intertwined, nature of the relationship was lately further confirmed by Macron’s impromptu trip to Saudi Arabia to find a solution to the crisis sparked by the Lebanese prime minister’s resignation in Riyadh.

During the late phase of Nicolas Sarkozy’s presidency and the early part of François Hollande’s term, France has mostly sought to bolster Middle Eastern governments with “reassurance”: providing its partners with reassuring responses to what it perceived as their anxiety in the face of domestic instability, changes in the regional balance of power, and international uncertainties. Cooperation on security, especially against the backdrop of severe terror attacks on French soil, proved a key ingredient cementing the relationship still further. But these dynamics have failed to gain France the influence and even the kind of stability that it aims for. The unpredictable local dynamics, in conjunction with Russia’s return to big power politics in the region and American disengagement (now complicated by the destabilizing Trump factor), have challenged France’s pursuit of its interests.

Due to its ambition to have a significant role in the region, France has maintained its traditional insistence on leading in Europe itself when dealing with Middle Eastern matters. Doing so has the added benefit of reinforcing its leverage. But France’s European partners remain, for the most part, unwilling to follow its lead. Even in recent years, when massive refugee flows and terrorist attacks have amply demonstrated how instability in the region threatens all of Europe, France has often felt alone in the Middle East. Europeans have to take responsibility for their own ability to pursue their interests, project their principles in the region, and protect their own homeland. France, in turn, must find a better way, beyond the pressure of events, to find a common direction and lead on that renewed basis. The truth is that if other Europeans do not follow it, this is at least in part the result of a French unwillingness to Europeanise its Middle East policy.

The reality is that France never held a homogenous policy with all Arab states. This policy evolved over time, but still, recurring patterns are indisputable in France’s realist approach to the MENA region, especially in terms of methods: placing particular importance on personal relations. France has close ties with the countries of the Maghreb, which include strong economic and migration elements. Due to this degree of interdependence, some commentators suggest the Maghreb should be France’s priority in the MENA, although the fact is that the current trend is one of normalization, with France’s centrality slowly eroding if only because of the waning of the ‘decolonization generations’, as well as of the rise of other trade partners, including non-Western ones, and also declining French resources invested in the region.

Even if existing historical ties are not as decisive in the Levant as they are in the Maghreb, France still positions itself as a power able and willing to maneuver autonomously if need be. Since the Arab uprisings, France’s aggressive stance on Syria may have stood out as stepping away from this balancing act. But, this has mostly been an exception meant to preserve broader stability. France has more often tried to balance its usual quest for settling regional conflicts or at least avoid further destabilization, such as in its support in shielding Lebanon from the flames of the Syrian conflagration, with maintaining good relations with incumbent governments.

When it comes to The Persian Gulf, France has fewer historical ties to the Gulf than to other parts of the MENA region. But since shifting its strategic focus from Iraq to the Gulf Cooperation Council (GCC) powers after the first Gulf war, France has increased its political, military, economic, and cultural investments in these relations, especially those with Saudi Arabia, Qatar, and the United Arab Emirates. Since 2011, France has continued to step up its game, including by trying to take advantage of the tensions between the Gulf powers and the Obama administration, be it on Syria or on Iran – with some success, as shown by Hollande being the first foreign leader invited to a GCC summit, in May 2015.

What works, then, is a combination of French leadership embedded in concerted European cooperation. It is this formula that France must seek to reproduce. Strangely enough, the debate during the French presidential election remained focused on narrow French security interests and whether they should trump other concerns, or inspire a rebalancing of French alliances, including towards those with Sunni Gulf countries such as Saudi Arabia and Qatar. Overall, it lacked any substantive reconsideration of Europe’s role in the region. Macron himself, although campaigning on a clearly pro-European platform, was much more specific about intra-EU affairs, such as Eurozone governance and migration policy, than he was about his European ambition on foreign policy.

‘Alone in the Desert? How France Can Lead Europe in the Middle East’ – Policy Brief by Manuel Lafont Rapnouil – European Council on Foreign Relations / ECFR.