EU Must Revise Its Security and Defense Strategy

Exclusive interview with General (ret.) Klaus Naumann, former Chairman of the NATO Military Committee and former Chief of Staff of the German Federal Armed Forces, on the EU’s failure to achieve an European Security and Defense Identity, the forthcoming EU Summit’s ambition to revive the Union’s security and defense policy, European powers walking around in Washington begging for ammunition, his impressions from Afghanistan and on the latest US-Russian convergence of views on the Syrian crisis. 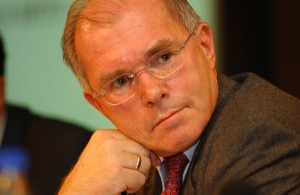 EUBULLETIN: Some scholars and EU policymakers and leaders have repeatedly expressed the idea that while the Union is globally perceived as a leading economic powerhouse, it should also seek to become and be accepted more as a global security actor. Can you see that the EU has the capacity and potential to become a real security actor in other parts of the world?

General Naumann: Well, I think the European Union will have to revise its security strategy as a result of the forthcoming EU Summit in December (2013). And if they do their homework properly, they will have to arrive at the conclusion that security in the 21st century must never be understood as a regional issue – it will always be global in nature. As you rightly said, the European Union is the most potent economic force in the world and, as such, it has to consider the security dimension as well. The EU will have to seek cooperation with others in Asia and with the United States who are rebalancing their security focus to Asia in order to be taken seriously as a security player in the region. We have security interests in Asia and in other regions and we have to find the way how to protect them.

EUBULLETIN: You said earlier that Europeans have to look beyond Europe to ensure their security. If you look, for example, at the South China Sea dispute, there have been voices in the EU calling for the Union to get involved in looking for possible solutions of this major security issue. Do you agree with these arguments? Does the EU have a stake in this and other regional conflicts and potential flash-points?

General Naumann: Any conflict around the world will affect global industry, commerce and trading organizations and entities, such as the European Union. To give you a very simple example, should there be, let’s say, damage to the software-producing facilities of India, in the Bangalore region, the EU will suffer tremendously since I think some 60 percent of the software used by our industries are produced there. And this is just one telling example of the many that exist which indicate how inter-linked, inter-twined our nations are in this globalized world. So, there is no longer a conflict to which we can say ‘we are not interested’.

EUBULLETIN: Has there been, in your view, some progress in the development of the European Security and Defense Identity (ESDI) – which is basically the idea of creating a kind of European pillar within NATO – over the last decade, particularly when you look at the EU’s approach to solving the crises in, for example, Libya and Syria?

General Naumann: Unfortunately, my outlook on the European Security Defense Initiatives is not a very positive one. We have seen a lot of statements and declarations but no action. We saw the establishment of the EU battle groups but, unfortunately, they were never employed. The recent crisis in Mali would have been a perfect situation for the deployment of an EU battle group but the lack of will on the side of the European governments prevented that. And then we also saw the terrible political performance of the European countries in the case of the Libyan crisis in which two countries quickly took the lead but then had to walk around in Washington with a beggar’s cap in the hand and ask for ammunition and other things. This proves once again that even such an operation which is not the most difficult one can’t be done by the Europeans on their own. This is, in my view, a situation which has to be changed – I still have some hope that the forthcoming EU Summit in December which will focus on defense and security will lead to a new beginning. But we have to be very clear on one issue: more integration in Europe means at the end of the day to transfer some national sovereignty to an international body – and this is a real stumbling stone.

EUBULLETIN: In the case of Mali, do you think that the French – with their traditional geopolitical interests in the region – would have been willing to let EU take the lead in the operations?

General Naumann: In Mali, the French definitely had the best experience, they knew the terrain, they knew the situation on the ground. However, this is not the question of handing over to the EU but the EU could have been deployed and could have acted with an EU battle group under the operational control of a French task force.

EUBULLETIN: In one of your earlier interviews while you were the Chairman of the NATO Military Committee, you suggested regarding NATO’s involvement in Afghanistan that what we needed was a better coordination between NATO, UN and NGOs. Do you think that this has been achieved?

General Naumann: I think that in Afghanistan, given the complicated and complex situation, some progress has been made. But the coordination between competing international organizations and NGOs who are always trying to perform as good as they can in order to encourage people to make donations for their future – that is a problem that still exists and that will remain with us for years to come. But, nevertheless, in that respect, some progress has been made, not everything is bad in Afghanistan, as a former German bishop has said. Some positive results have been achieved but, all in all, Afghanistan can’t stand as a synonym for success.

EUBULLETIN: To reflect on the latest developments in the Middle East, what do you personally make up of the latest US-Russian convergence (of views) on the Syrian question? How do you interpret the recent cooperation between Washington and Moscow and what could be the possible implications for Europe?

General Naumann: The first point one has to make is that the use of weapons of mass destruction is a crime which must not be tolerated. If the world would simply not respond to that, we would open the Pandora ’s box and many other bad things would follow. We should never forget that some 25 nations in this world possess chemical weapons. On the second point, I think the real shift came when the Americans threatened with the use of force – then, suddenly, diplomacy was backed by force and this produced the change of view on the Russian side with the Syrian regime following suit. I think the best example is the statement of the Russian foreign minister, Sergey Lavrov, at 10am and compare that to his statement at 4pm on the very same day – it was a turn of 180 degrees. Ultimately, it was the American and also the French threat to use force which presumably made the Russians rethink this issue.