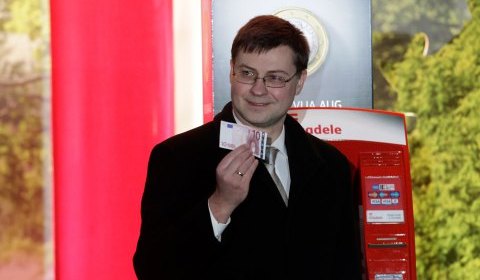 Latvia has adopted the euro as its official currency starting of the 1st January of 2014, becoming the 18th member of the euro area. It is the second Baltic state after Estonia in 2011 to adopt the single European currency.
The majority of Latvians already had euro cash two days before the changeover. The previous national currency – the lat – is now being phased out during a transitional two-week dual circulation period when both currencies have legal tender status.
According to financial experts, the conversion of ATMs (cash dispensers) also went smoothly and all ATMs have been distributing euro banknotes from the first hour of 1st January.
European officials say Latvian commercial banks had received euro banknotes and coins in advance from the Central Bank which in turn supplied euro cash to shops and other businesses.
By adopting the Euro, Latvia joined the 330 million people who use Europe’s single currency. With its large ethnic Russian minority, Latvia is often seen as having closer economic ties to Russia than its fellow Baltic States Lithuania and Estonia. Russia remains an important export market for this country, while its banks have large deposits from clients in other ex-Soviet states.
Latvia hopes that the integration of the “lat” in the Euro system will bring stability to the country which had met all the economic targets set by the EU before switching to the euro. The European Commission has approved the expansion of the European area to include Latvia, a move seen as an endorsement of the country’s economic health.
Rating agencies raised Latvia’s credit rating by one notch. Latvian government expects rating to go up still further to an “A” category which will enable the country to borrow more cheaply on international markets and bring down the interest rates which is good for businesses.