Sanctioning Russia: How to ‘Square the Circle’? 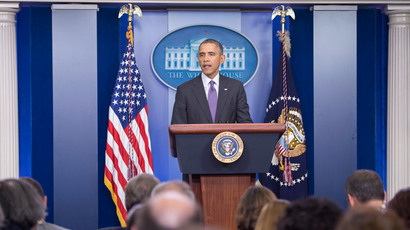 The European Union, the United States, Ukraine, and Russia reached a surprise agreement last week (April 17) in which they committed themselves to take immediate steps to soften the Ukrainian crisis. However, US President Obama concurrently pointed out he was afraid whether Moscow was trustworthy enough to stand by the deal, thus conveying his scepticism about Moscow’s vows to de-escalate. The US President also reiterated that the US and its allies were prepared to employ a fresh round of sanctions though he did not specify what they may look like and what sectors of Russia’s economy they could target in case Moscow’s commitments and promises from Geneva do not materialize. Yet, so far sanctioning has been rather meek from the EU’s side, which only dared to blacklist a number of individuals with strong ties to Kremlin, and now nobody can be sure how far Brussels will go to expand the list. The US has proved to be much more resolute in designing and implementing sanctions than its main ally – this is also because the US is much less economically exposed to Russia and an economic blowback from sanctions on the European Union would likely be more serious.
After Brussels and Washington had focused on blacklisting, it is now time to move to something stronger. By this time of the year, more capital has left Russia than in the entire 2013, and the rouble, stocks, and bonds have also fallen significantly. It seems like finance could be a good sector to start with. Given the domination of the US dollar in global markets, taking an anti-Russia action in the financial sector could easily transform from a unilateral move of one country to an unintended multilateral move of the global economy. America plays a key role in the clearing of cross-card and cross-border transactions as well as money-laundering compliance, and America’s financial health is much better now than that of Russia. Vladimir Putin had realized this fact long before he started his venture in Ukraine, which explains his year-long efforts to decrease the pre-eminence of US dollar in international trade and finance.
So far, Rossiya Bank is the only bank that has been sanctioned by the West by stopping foreign-currency transactions and denying access to MasterCard and Visa. The bank has also been “motivated” to consider broader usage of rouble as settlement. The bank is the only Russian firm that has been sanctioned as a result of the Ukrainian crisis, although it is neither the biggest nor the most important bank in the (banking) sector. It has been carefully selected due to close links of some of its major stakeholders to Vladimir Putin. As a result of “the unscrupulous actions of foreign financial institutions” – as the bank’s official statement put it – the management has decided to operate only in the Russian market and with rouble only in order to protect its clients. Bank Rossiya’s case vividly demonstrates how easily bigger banks could freeze out of US dollar and international ties if sanctioned.
Unfortunately, despite their undisputable effectiveness, sanctions targeted at finance are not easy to remove. The experience with anti-Iran sanctions shows that releasing the sanctioned country from punishment does not come immediately but only in stages and with large delays as financial institutions are often worried for far too long a time that they would violate sanctions. This can be naturally costly. Moreover, some “fat cat” banks often have lucrative deals with the sanctioned economy, which makes them reluctant to drift with the tide. For instance, JPMorgan has made more than 50 million USD only in Russian-investment banking fees.
Last but not the least, Russia could also choose to retaliate and introduce countermeasures within the financial sector. Moscow could opt out to interrogate international investors and increase tax on “irregularities”. These ideas are not so much out of the blue when one remembers the notorious 2008 China-Russia deal when the two countries decided to dump their holdings in order to deteriorate then-ongoing crisis and thus coerce a bail-out. In any case, Western sanctions will likely cause at least some degree of collateral damage. Whether playing around with Russia’s foreign currency stocks or price of oil, the game that the West plays with Moscow can easy flip over and spill its outcomes globally.