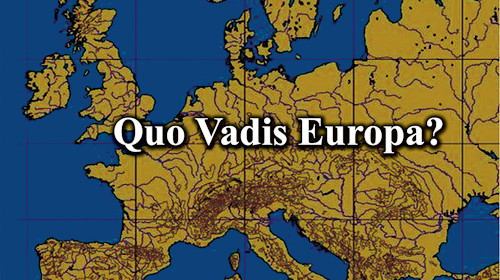 Although the first half of 2014 looked promising, as Europeans believed that the old continent would rebound just like its American and British counterparts, these hopes were soon dashed. Now fast forward a year later and you will find that Eurozone had kept its modest zero-point-something growth rates but that’s about it. With deflation having been a major concern in early 2015, the European Central Bank set out on its adventurous journey when it started to implement its quantitative easing program to help inflation rise. Although Europe’s problematic economies, like Greece, have seen their bailout programs continue, unemployment in Europe is still running very high.

The giant investment program that should stimulate growth and job creation in 2015 is hoped to give Europe a quick boost but the truth is that the old continent, to a great degree, lacks innovativeness and entrepreneurship, and thus also competitiveness. European IT and high-tech companies lagging behind their American competitors only underlines the fact that Europe is not able to come up with similarly successful “start-ups”. Let’s hope that those who think that Europe is facing a “lost decade” are not right.

After a decade of the rule of Jose Manuel Barroso, the 11th President of the European Commission, it seemed hard to say goodbye and welcome a new leader. Since November 2014, Jean-Claude Juncker, the spitzenkandidat of the European People’s Party, became the first president that had campaigned for the position prior to the election, a novelty introduced with the Lisbon Treaty.

The new leadership of the EU Commission also features Frans Tsimmermans, the first Vice-President of the EU’s executive branch, and Italy’s Federica Mogherini, the second female Head of European diplomacy. During the first six months of her term, Mrs. Mogherini has already managed to express a direct support for the Palestinian statehood and to demonstrate a lack of Russian expertise. Mrs. Mogherini might have been a good choice for Europe at other times, but voting for someone just to fill in gender quotas may not have been the best decision.

Another major leadership change occurred in the European Council whose President is Poland’s former Prime Minister, Donald Tusk. After a three-month crash course of English, Donald Tusk assumed the role of the main representative of the EU on the world stage and thus reaffirmed the stable position of the “new Member States” in the block.

The number of people seeking to obtain a refugee status in the EU has continued to go up in 2014, which was mostly driven by the conflicts in Syria, Iraq and a poor security situation in North Africa. According to UNHCR, the 28 EU Member States recorded 264,000 asylum applications, an increase of 24 per cent compared to 2013. The vast majority of these applications were made in the EU countries but their distribution remains to be uneven.

Among the most popular countries among asylum seekers are Germany, France, Sweden, Italy, and the United Kingdom. However, the biggest burden and cost of securing the EU borders naturally lies with the Mediterranean countries while those members, which are less affected by migration, seem unwilling to change the current policy and system to deal with illegal migration. For instance, Italy’s Mare Nostrum has saved about 100.000 migrants in the waters of the Mediterranean since its establishment in 2013 but Rome struggles to get financial support from the joint EU budget.

The unwillingness of less affected countries to financially contribute to the common EU migration policy is unfortunate. The onus of migration will get bigger and spread throughout the EU as large-scale displacement in Ukraine has already called for urgent responses to humanitarian aid. At the same time, external displacement has motivated about 6,000 Ukrainians to seek asylum in the EU countries. Moreover, the on-going conflicts across the Middle East and North Africa will increase pressures on the southern EU countries. As a result, the EU may eventually be forced not only to finance the construction of refugee camps, just like Turkey did, but also come up with a more solid and unified way of protecting the dignity of those who are simply less fortunate than us, citizens in the ‘Fortress Europe’.