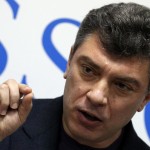 The European Parliament has shortlisted exceptional individuals for its prestigious Sakharov Human Rights Prize. The prize is awarded every year to honor those who combat intolerance, fanaticism and oppression. This year’s nominees are RaifBadawi, a Saudi Arabian blogger sentenced to 10 years in prison and 1000 lashes for insulting Islam, Edna Adan Ismail, a Somali activist fighting for the abolition of female circumcision, Boris Nemtsov, a Russian opposition leader assassinated in Moscow in February this year, NadiyaSavchenko, an Ukrainian military pilot illegally transferred to Russia, Edward Snowden, who leaked the information about U.S. surveillance programs to the press, Stephanie Gibaud, who uncovered tax evasion by UBS, Antoine Deltour, a former PWC auditor who revealed secret tax rulings with multinational companies in Luxembourg, and political prisoners in Venezuela trying to unify the opposition to President Hugo Chavez’s political party.
Boris Nemtsov and RaifBadawi are among the most discussed nominees. The murder of a 55-year-old critic of President Vladimir Putin sparked global outrage and condemnation. It alsoproved thatthe Kremlinhad little tolerance towards dissidents and little willingness to track down their killers. RaifBadawi, in contrast, has been sentenced to corporal punishment for opening the website “Free Saudi Liberals”.The European Union criticized the sentence as “unacceptable and contrary to human dignity”.

The Sakharov Prize will be awarded later in October.Last year, the winner was Congolese doctor Denis Mukwege who helps victims of gang rapes by soldiers. Previous winners also included Pakistani education campaigner MalalaYousafzai, late South African rights icon Nelson Mandela and Myanmar activist Aung San SuuKyi. The winner is awarded the prize of 50,000 euros.Nominations for the Sakharov Prize are made by political groups or by at least 40 MEPs after which the foreign affairs and development committees vote to choosethree shortlisted candidates. The winner is finally selected by the Conference of Presidents, made up of the EP President and the leaders of the political groups.