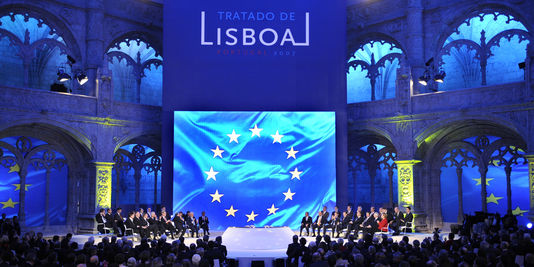 The current situation on the international scene has placed the EU’s common defense into an unstable position. The recent developments, which include, among others, the annexation of Crimea and the destabilization of eastern Ukraine, are significantly affecting European security on both internal and external level. In the long run, the global security power structure is moreover shifting from the United States towards new players, which brings an opportunity for EU Member States to assume a more decisive role in the area of international security.
The Treaty of Lisbon, which includes institutional and decision-making reforms in the Common Foreign and Security Policy, can be instrumental in achieving this objective. Creating the new position of the High Representative of the European Union for Foreign Affairs and Security Policy and the European External Action Service (EEAS) has led to a greater cohesion and consistency in the area of common defense policy. The post-Lisbon period also demonstrates greater solidarity and cohesiveness among EU Member States in their common defense as well as their greater willingness to cooperate in this area. Nevertheless, the inter-governmental coordination of the European security, for instance, continues to be one of the persistent weaknesses in common defense.
As to Denmark, which is one of the parties to the Treaty due to the so-called opt-outs, one of which is precisely the exception regarding the common defense. However, the defense exception has mostly been seen as an obstacle for Denmark, which has to deal with continuous problems with the involvement of its army in joint military missions. The Danish opt-outs can thus isolate the country in the medium and long run from a deeper cooperation mostly in the ongoing common defense projects and the new permanently structured collaboration, which is part of the process of strengthening the European defense industry and making a more intensive use of the access to the EU’s external action.
With respect to the objectives of the 2003 European Union Security Strategy and considering the ongoing conflicts in Europe’s neighborhood, the issue of defense and security is in the center of attention of the EU Member States. However, despite these worrying developments just across the EU’s external borders, many countries decided to cut their military budget due to the financial crisis, which has significantly decreased the EU’s capacity for action in a potential conflict. To better illustrate the severity of the problem, as of 2014, the military expenditure of the 27 EU countries was 186 billion EUR whereas the United States had a budget of 600 billion EUR. Only a small number of the NATO members is capable of fighting at all three levels – in the air, in the water and on the ground.
Precisely because of the current vulnerability of the European countries and in light of the still simmering conflict in Ukraine, the EU is interested in establishing cooperation between the Member States in the defense area in order to face new security challenges. The NATO has similarly called for an increase in military budgets mostly due to the very fact that while other major players like China, Russia or Saudi Arabia rapidly increased their military budgets in 2014, European military expenditures went in the opposite direction. Nonetheless, Europe needs a major player, ideally a big country, to emerge, which would assume a leadership role in the area of EU common security. The implementation of the idea of a common EU army, as proposed by Jean-Claude Juncker, is probably being put off to a more distant future.

(The study can be downloaded here:http://www.diis.dk/files/media/publications/publikationer_2015/diis_report_06_european_defence_cooperation_after_the_lisbon_treaty_web.pdf)