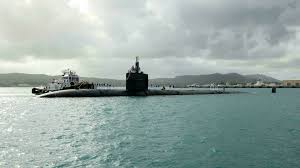 The new Indo-Pacific security alliance between the United States, the United Kingdom and Australia and specifically the related defence deal was a “stab in the back”, French Foreign Minister Jean-Yves Le Drian said on Wednesday (16 September), as he drew parallels between President Biden and his predecessor, President Donald Trump. The AUKUS partnership was announced the previous day by Washington, Canberra and London designed mainly to counter China’s influence in the region. It will see Australia cancel its contract with France for submarines in order to get some nuclear-powered ones from its new partners. Expressing “total incomprehension” at the decision, Le Drian blasted the deal and described himself on France Info radio as “angry” over the announcement. “It’s just not done between allies,” he said, adding that “this unilateral, brutal, unpredictable decision is very similar to what Mr Trump used to do.”
The French foreign minister stressed that his country won the contract to supply submarines to Australia two years ago and that neither the US nor the UK had taken part in the tender process. “We had established a relationship of trust with Australia and this trust has been betrayed,” Le Drian said. “This is not the end of the story.” In a joint statement with the Defence Ministry, France’s Foreign Ministry also said that Australia’s decision “is contrary to the letter and spirit of the cooperation that prevailed between France and Australia, based on a relationship of political trust as well as on the development of a very high-level defence industrial and technological base in Australia.” The joint statement also said that the “American choice to exclude a European ally and partner from a structuring partnership with Australia, at a time when we are facing unprecedented challenges in the Indo-Pacific region, whether in terms of our values or in terms of respect for multilateralism based on the rule of law, shows a lack of coherence that France can only note with regret.”
The new AUKUS security pact is aimed to protect and defend shared interests in the Indo-Pacific region, the three partners said. It plans for deeper diplomatic, security, and defence cooperation between the three capitals with enhanced capabilities and interoperability in cyber, artificial intelligence, and quantum technologies. Although none of the three governments made any mention of China, the new partnership is widely understood to be an attempt to counter Beijing’s assertiveness in the region. Australia’s decision to cancel its contract with France to purchase its submarines came because the new pact allows Australia to develop a nuclear-powered fleet — an option that was not open to Canberra when it struck a deal with France in 2016. Until now, the US has only shared the technology — which allows submarines to avoid long periods on the surface and go undetected for longer — with the UK. “Of course, they’re disappointed,” Australian Prime Minister Scott Morrison said, referring to France. There had been serious doubts about whether “a conventional submarine capability” would address his country’s strategic needs in the Indo-Pacific region, Morrison sought to explain his government’s decision, adding that “they’ve been good partners [but] this is about our strategic interest, our strategic capability requirements and a changed strategic environment and we’ve had to take that decision.’’