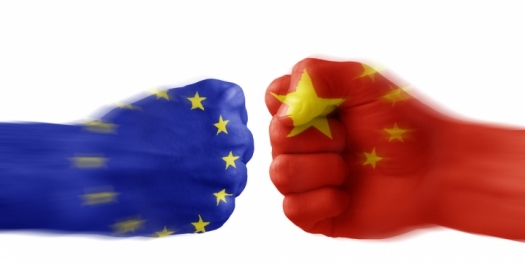 The European Union’s trade deficit in goods with China logged a decrease down to 62 billion EUR in the first two quarters of 2013. Over a number of years, China has tremendously increased its business activity in the EU – especially increasing its trade in goods has caused a continuous deficit. Both EU exports to China as well as EU imports from China have been increasing, from 4 percent in 2002 to 8.6 percent in 2012 and from 9.6 percent in 2002 to about 18 percent in 2010. As a result, EU’s trade deficit in goods increased from 55 billion in 2002 to about 150 billion in 2012, while the peak was in 2008 when the deficit was worth more than 170 billion EUR.
According to the Eurostat, both imports and exports from China decreased substantially in the first half of this year. Significantly, EU’s imports decreased less that exports, which helped reduce the amount of the deficit from 68 billion EUR in the first half of 2012 to 62 billion EUR in 2013. On the occasion of the ongoing 16th EU-China Summit currently taking place in Beijing, the Eurostat published various statistics regarding mutual trade links between both parties.
China is the second largest trade partner of EU28 after the United States. Except for Germany and Finland, however, all EU member states log trade deficits with China. The largest deficits are observed by the Netherlands (-20.9 billion EUR), the United Kingdom (-12.2 billion EUR) and Italy (-6.7 billion EUR). In contrast, Germany (45 percent of the EU exports) is the most important exporter to the Chinese market followed by France (10 percent) and the United Kingdom (9 percent). As to trade in services, EU27’s exports and imports grown since 201. In 2012, the EU27’s exported trade in services amounted to about 30 billion EUR, while China exported only about 20 billion EUR in services to the EU.