Caught in the Middle of Syria’s Bloody War: EU to Increase Humanitarian Aid 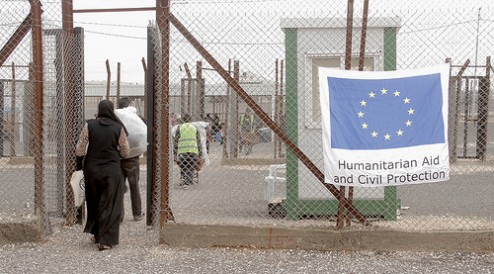 In response to the rapidly deteriorating humanitarian situation in Syria, the European Union has decided to increase the amount of assistance for the country by €136 million in humanitarian funding. Half of the amount will directly head to the country via cross-border assistance from neighboring countries, and the other half will be granted to Syrian refugees and communities in the camps in the neighboring countries – Iraq, Jordan, Lebanon, and Turkey. The new funding will help people displaced within Syria and refugees living outside and inside refugee camps to ensure their access to shelters, livelihood, and dignified life despite the dire circumstances. The money will be traditionally used to deliver assistance such as potable water, medical supplies, food, shelters, and cash assistance.

The new package was announced yesterday (29 January) by Commissioner for Humanitarian Aid and Crisis Management Christos Stylianides and Commissioner for European Neighborhood Policy and Enlargement Negotiations Johannes Hahn, who are both on an official visit of Lebanon and Jordan. Discussions on the growing needs of Syrian refugees and the growing burden on neighboring countries are high on the agenda.

The block of 28 EU Member States is the leading international humanitarian assistance provider around the world and notably in Syria. The EU has so far mobilized more than €3 billion in assistance for conflict-hit Syria. The block alone has provided about €676 million in humanitarian assistance. The EU humanitarian assistance is channeled through the European Commission’s Humanitarian Aid and Civil Protection Directorate and primarily focuses on life-saving medical emergency responses, the provision of essential drugs, food and nutritional items, safe water, sanitation and hygiene shelter, distribution of basic non-food items (NFIs) and protection to help the most vulnerable families. Substantial support has been also given via the European Neighborhood Instrument to help the neighboring countries tackle the consequences of the Syrian civil war on the borders. €250 million has been provided to Lebanon and €160 million to Jordan since the start of the crisis.