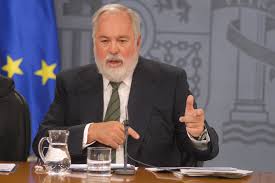 The EU’s negotiating mandate for the December COP21 talks in Paris was achieved on Friday (18 September) during the meeting of EU environmental ministers. Despite the negative attitude of the Visegrad countries, leaders managed to agree on a 40 percent cut in greenhouse gas emissions by 2030 over 1990 levels.
In case of Poland, the matters are particularly complicated due to the upcoming parliamentary elections and the ongoing pre-election campaign. The rightist Law and Justice party has been promising its electorate to resist the EU environmental law and protect the country’s coal industry. However, Poland realized early in the Friday negotiations that it was isolated, which motivated it to agree to some changes in wording. For example, the word “decarbonization” was changed to “climate neutrality”. Observers, however, agree that the changes are of no substantial importance.
EU Climate Commissioner, Miguel Arias Cañete, told reporters that the EU stood ready “to conclude an ambitious, vast and binding global climate deal, and we will settle for nothing less”. Commissioner Cañete also said that the block would lobby for emissions to peak by 2020 at the latest, and have them decreased by at least 50 percent by 2050, compared to the 1990 baseline. “They should be near zero or below by 2100,” he concluded. French Environment Minister, Ségolène Royal, added that the ministers had moreover agreed that the planned UN agreement should embed five-yearly reviews to boost efforts to fight climate change.
The EU’s objectives are consistent with those of the United Nations. Both sides would like to retain global warming to no more than two degrees Celsius over pre-industrial levels. Scientists and researchers say that keeping this number is crucial to avoiding drought, floods and sea level rises.Despite the smooth progress of the Friday talks, it is still unclear how, when and whether at all the EU negotiators will manage to gain the necessary support from emerging countries to come up with a truly impactful deal.