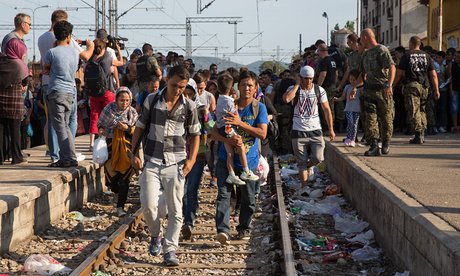 The roots of the current migration crisis can be observed since 2005. Spain was then forced to take necessary regulatory measures due to the increased migration of sub-Saharan Africans through the Spanish enclaves located on Morocco’s Mediterranean coast – Ceuta and Melilla. Another wave of a massive population shift occurred in 2011 when the regime of Muammar Gaddafi was toppled in Libya. The main country that got under the pressure of refugees was Italy, specifically the island of Lampedusa. In the same year the conflict in Syria began, which now accounts for up to a third of all refugees in Europe. The common features of the immigration countries of origin are essentially the following: weak central and local governments, atrocities committed on its citizens are the norm rather than the exception, a failed economy, the non-existence of a social system and dependence on foreign aid. The Fragile State Index can help us to compile an imaginary list of the worst states with the lowest ranking going to Somalia, South Sudan, Syria, Afghanistan and Eritrea. The main area covered by the migration from these states is then the Western Balkans region (the countries of former Yugoslavia and Albania).

What attitudes do the selected Western Balkan states have to the migration crisis and what is their significance? Serbia is, in this respect, first and foremost a major transit hub, which takes two days for refugees to cross. Since January 2015, Serbia has recorded approximately 600,000 incoming migrants. The Serbian policy towards the migrants could be described as “seamless”, and only with a few exceptions, the central government manages the crisis with a financial and humanitarian aid from the EU. In contrast, Macedonia, despite its historical experience with the migration in the 1990s, when the disintegration of former Yugoslavia and the subsequent conflict over Kosovo were taking place, cannot cope with the current influx of refugees. In August 2015, Macedonia’s central government was forced to declare a state of emergency since about 10,000 migrants had been passing the country daily. This is given by the fact that the cooperation between the EU and Macedonia is somewhat less intensive than it is in the case of Serbia.

According to the estimates, it is expected that in 2015-2017, about 3 million people will pass through the Western Balkans, from Thessaloniki through Belgrade and on to Croatia and Slovenia. The Commission is, in this context, designing and implementing only short-term measures such as the setting of a relocation mechanism, reform of the Dublin system or the provisions of the European Border and Coast Guard. A solution should nevertheless be set in the long-term, focusing mainly on the assistance to the countries of the Western Balkans. Consequently, a continuously proactive policy of the EU and the international community should be conducted, which should be directed towards the solution of the problem in the source countries of migration.

(The study can be downloaded here: http://www.europarl.europa.eu/thinktank/en/document.html?reference=EPRS_BRI%282016%29573949)