Real Madrid to Play Friendly in Algeria in 2014 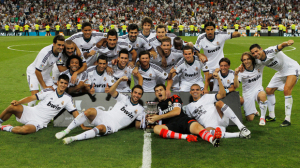 Real Madrid, one of the most famous soccer teams in Spain’s premier League and the world, will play next year an exhibition match in the North African country of Algeria.

May 18, 2014 is the date set for the friendly under an agreement inked lately in the Santiago Bernabeu stadium in Madrid between Mediapro Company, which holds the exclusive marketing rights of Real Madrid and the Algerian mobile operator Mobilis.

The deal was reached after intensive talks the two sides due to tight agenda of Real Madrid. The financial terms of the agreement was not disclosed, but some soccer experts and managers suggest millions of dollars in cash.

The game will oppose Real Madrid stars to an Algerian club to be determined in coordination with the Algerian football federation. The tickets for the friendly are expected to be sold out long before put on the market. The event will draw Real Madrid fans from Europe, the Maghreb and elsewhere, in addition to a host of sponsors.

According the CEO of the Algerian phone operator Mobilis, the exhibition match will cost the company no penny thanks to the financial support of its foreign partners, namely the Chinese ZTE, and Swedish – Japanese Sony Ericsson.

The Real Madrid club, one of the wealthiest in the world, gathers many superstars and big names such as Cristiano Ronaldo, Jese, Morata, Modric, Benzema, Denis, Diego Lopez, Kaka, Casemiro, Mesut Ozil, Marcelo, Isco, Nacho and many others. Another superstar, Gareth Bale is also expected to join the club in a Euro 100 million record transfer deal, creating a lot buzz among soccer fans.

Algeria, one of the major oil and gas producers in the Arab world, is also banking on the friendly match to improve its image, as the game will be broadcast worldwide by major TV stations allowing millions of viewers to see their favorite players in the field. It is also an opportunity for the Algerian local players to show off their talents and innate skills in a bid to attract the attention of sports managers or soccer coaches seeking gifted players.