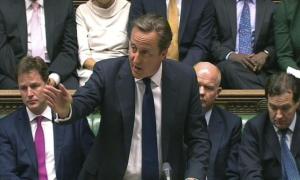 Despite the alleged use of deadly chemical weapons by the Syrian regime and the horrible images broadcast around the world of men, women & children gasping for breath beside rows of dead bodies wrapped in white shrouds, it seems that most Britons rebuff the idea of going to wars or sending troops overseas.

Not because they are selfish or indifferent about the sufferings and ordeals of the other people. Surely, they were appalled by the haunting images of the massacre committed on august 21, 2013 by the Syrian army in the suburbs of Damascus.

Surely, they want to help the victims of that senseless chemical assault and provide humanitarian assistance. But all they won’t to do is to get involved or sucked in another bloody conflict as the shadow of the wars in Iraq and Afghanistan still hovering over their mind. All they want is simply mind their own business, keep their jobs and health benefits.

This state of mind has been confirmed by a recent poll carried out by the YouGov survey. The opinion poll finds that 74 pc of British public oppose sending troops in to Syria, and 50 pc are against attacking Syria with long range missiles.

Sensing the British people reluctance to engage in another unpopular war, leaders of the opposition Labor party chose this week to side with their constituents and vote against a motion tabled by the conservative government . The motion calls for action against Assad regime in response for “the use of chemical weapons in Syria”, claiming hundreds of lives deaths and thousands of injuries of Syrian civilians.

The motion, which was defeated in the Commons with 272 votes to 285, also calls for “a strong international humanitarian response”, which involves the use “military action to save lives by preventing and deterring further use of Syria’s chemical weapons”.

Speaking after the defeat, Prime Minister David Cameron said it was clear Parliament “does not want to see British military action” in Syria.

During the motion’s debates, labor MPs said they need to see compelling evidence that Syrian regime was behind the chemical attack before making any decision. They also demanded that the UN inspectors be given necessary time to report their findings to the Security Council before signing up for military action against Syria. Precautions to avoid intelligence manipulation and mistakes made during Iraq war for weapons of mass destruction. So far no WMDs have been found in Iraq.