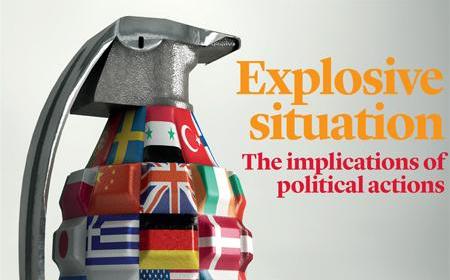 Europe and Globalisation: the Dangers and the Assets
Nicole Gnesotto (Robert Schuman Foundation)

It looks like the European Union is unable to carve out a space for itself and exert its influence in the international arena. The EU´s influence is weakened on the international scene, it is negatively influenced by demographic developments, its share in the world trade is gradually and surely diminishing and its energy dependency is tied to unstable regions. Weak political integration of the European Union prevents the formation of centers of influence, and the EU is therefore unable to influence large global institutions and to shape global governance. The EU that lacks strategic vision has been traditionally divided when it comes to its foreign policy making and implementation. It tends to avoid strategic responsibility and accepts, under the wings of NATO, the leadership role of the United States. It seems to be the case that the entire European integration model is in crisis: EU citizens and foreign partners do not trust the Union also because it is significantly affected by impoverishment, recession, and suffering by the South-versus-North divide.
Moreover, the crisis of identity in the whole project reappeared. There is no consensus on the role and purpose of the EU in the process of globalization. Should the EU deal with the imbalances stemming from globalization collectively? Or is the EU rather the main component of the success of the world economy, while concurrently having the ambition to shape the rules of the ‘game’? The EU project of the 21st century is missing a great mobilizing narrative, which was present after the Second World War and the collapse of communism in Europe.
Despite the internal crisis, the EU population holds the key to the restructuring of the world globalized system. They have legitimate and effective international institutions. They stand for the principles of common sense, such as that democracy cannot be imposed upon a nation or that a dialogue and multilateral relations are vital preconditions for the prevention of conflicts or that the poverty in the world is as destabilizing as the violence brought up by terrorism. Another major benefit of the EU stems from the way it thinks of the nation-states and their role in the international system. Individual states cannot cope with issues such as climate change, economic crisis and the fight against terrorism by themselves. Globalization puts the nation-states to the forefront and at the same time it reveals their weakness. In this regard, the EU can provide an example of coherence and functional structure of an organization that can respond to and deal with the challenges of globalization. The themes for success of the EU in a globalized world therefore are: restoring growth, sharing of sovereignty, defense of democracy.
(The study can be uploaded here: http://www.robert-schuman.eu/en/european-issues/0296-europe-and-globalisation-dangers-and-assets)

The still-lingering economic crisis has shifted the attention to the entire European integration project, and especially to one of its greatest achievements, the euro. The establishment of the eurozone should have gradually diminished economic differences between the member states and narrow the gap between the levels of their economic development. The authors argue that a small degree of convergence is the result not only of economic and political-economic factors, but also of the inconsistency in the institutional structure of the euro area and the EU as a whole. The current crisis is therefore a multifaceted phenomenon that can be described as a peculiar mixture of “balance of payments crisis” and “institutional crisis”. European leaders can solve the crisis only if they acknowledge its multidimensional nature.
Through the implementation of the various steps to resolve the eurozone crisis, politicians did not cover all of the problem areas and their decision might not be fully effective. Leaving room for interpretation in determining budgetary rules belong to one of the shortcomings in decision making. For example, now the terms like structural deficit and exceptional circumstances become a problem. As the EU member states may understand the meaning of these words differently, they tend to institutionalize the flexibility that these laws, conversely, want to eliminate. The missing formula for crisis management was also problematic and, therefore, when Greece was strongly affected by the debt crisis, euro area member states had yet to agree on whether Greece deserves to be saved.
The emerging crisis also highlighted the lack of the surveillance (SSM) and restructuring (SRM) mechanisms, which resulted in the deepening of the vicious circle between the domestic banking system and national governments. To solve the various issues the euro area has to deal with, the authors of the study recommend introducing more flexible, yet automatic mechanisms, based on taxation. The Union should move away from prescribing strict rules and should rather turn to progressive taxes, which are considered as possible alternatives to regulation.
(The study can be uploaded here:
http://www.ispionline.it/en/pubblicazione/eurozone-flaws-uncovering-holes-cheese-9529)

The current commissioner for the European Union (EU) Štefan Füle, who is responsible for EU enlargement and neighborhood policy, thinks of Turkey as a strategic partner for the European Union. In his words, Turkey, with its strong and dynamic economy, is a major trading partner of the EU. At the same time, thanks to its strategic location, Turkey becomes an important partner in matters of energy security. After five years of mutual disagreement, it seems that the relations between Turkey and the EU are currently going through a period of fundamental improvement, which may also be due to more forthcoming attitude of the most important member states, such as Germany and France. Turkey had to rethink its views of and the attitude to the EU as well, mainly because its economic growth is slowing down and also because Turkey´s ambitious plans for the expansion of its market in the Middle East and North Africa are at risk due to the unrest particularly in Syria, Egypt and Iraq.
One of the sectors, where both partners could benefit from closer cooperation, is energy security. Today, Turkey has one of the fastest growing energy markets in the world. Regarding the consumption of natural gas and demand for electricity, Turkey is ranked the second, only after China. Energy security policy of Turkey has a strong European dimension, which could play an important role in the negotiations on its accession to the EU. However, the uncertain status of the accession negotiations could have a negative impact on the success of the EU-Turkey cooperation in the field of energy security.
The diversification of the oil and gas transport routes is one of the key objectives of the EU’s external energy strategy. In this context, the development of the Southern Corridor for gas transport represents a cornerstone of EU’s energy policy and a basic test case for cooperation in this field between Brussels and Ankara. However, Turkey still has a long way to go, when it comes to its accession to the EU. Only 14 from 35 chapters for accession have been opened and only one was successfully closed. The main difficulties for accession still remain the same: low public opinion support in key EU member states such as Germany and France, the unresolved Cyprus issue and the overall slowdown of democratic reforms in Turkey.
(The study can be uploaded here:
http://www.atlanticcouncil.org/publications/external/eu-turkish-energy-relations-in-the-context-of-eu-accession-negotiations-focus-on-natural-gas)