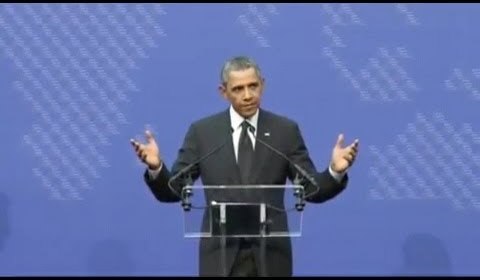 European leaders and American representatives including President Obama have gathered for an EU-US summit that produced a “joint statement” on the crisis in Ukraine. Unlike many previous summits, this one has not finished with the signature of an agreement or a treaty. In addition to streamlining the joint EU-US position on the annexation of Crimea, both partners have showed a great degree of solidarity during these hard times for both US and EU foreign policies.
Nonetheless, both sides come with reproaches. Whereas the US complains that the EU is not spending enough money and resources on its own military, the EU accuses the US of spying on its allies. Before President Obama landed in Brussels, the European Commission had said that the US should provide EU citizens with the right to “judicial redress” in the US in case their privacy was infringed on. This should be done with the aim to “restore trust and maintain the continuity of data flows between the EU and US”.
The US delegation that came to Brussels had 700 officials and 200 security guards. President Obama used his Marine One helicopter to move around while being accompanied by about ten military helicopters. He also used his armoured Cadillac called “the Beast” that was moving in a convoy of about 40 additional cars. The cost of the entire summit is unknown though Brussels mayor Yvan Mayeur suggested it was about 10 million euros. Later, he corrected himself saying it was only 500,000 euros.
The EU-US summit should take place annually, yet the last summit was already three years ago in Washington. This makes the EU leadership anxious that the EU’s top administrative bodies – like the Commission or Parliament – are not as important to Americans as some particular member states such as Germany, Great Britain, or France.