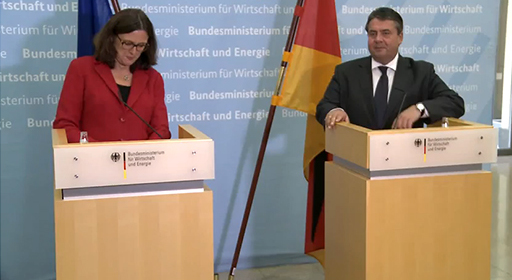 European Trade Commissioner, Cecilia Malmström, announced that the free trade deal, the EU-Canada Comprehensive Economic and Trade Agreement (CETA), is final and only small changes can be made to the investment protection clause. “There can be minor clarifications and adjustments,” she said during a news conference in Berlin with German Economic Affairs Minister, Sigmar Gabriel. Mr Gabriel also added that it was not possible to remove the dispute settlement procedure out of the CETA. “We are acting in a European context and must listen to the views of other countries,” Minister Gabriel said after the meeting with Commissioner Malmström. He said that “improvements” and “changes” are envisaged to take place in the next few months.

The clause is disputed because it would make it possible for firms to take cross-border legal action against governments. Ms Malmström hinted that the Commission would make any changes in the most transparent way possible so that the CETA can be successfully ratified by the member states. The Commissioner’s announcement is a response to criticism across the EU28, including Germany. In September, Minister Gabriel had said that Germany would not sign the deal unless this clause was removed, thus saying no to investment protection agreements in both CETA and TTIP between the EU and the United States.

It is currently not clear what next steps will look like. Ms Malmstöm earlier assured that special legal conditions for investor suits would not circumvent the jurisdiction of courts in the member states. Negotiators however hope that the CETA will create an additional trade volume of approximately €26 billion. The deal is considered a template for the extensive free trade agreement between the EU and the United States.