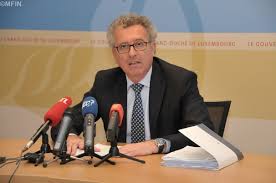 Euro zone leaders said that the first review of Greek reforms under the latest bailout is expected to start next month. On Saturday (12 September) euro zone finance ministers discussed the preparations for the reforms under the third bailout worth 86 billion euros at an informal gathering in Luxembourg. The revision of the progress should subsequently pave the way for debt rescheduling negotiations although no review of the reform implementation process is possible before the Greek parliamentary elections, which will take place on 20 September.

“There are elections in Greece. We have to wait for the results,” Luxembourg’s Finance Minister, Pierre Gramegna, reminded. He added that the next step was an October review after which the restructuring of the Greek debt must be discussed. “There is consensus that debt is too high. How to restructure it? There are diverging views.” he admitted. Minister Gramegna, however, emphasized that debt restructuring would not include the option of a write-off while suggesting that “you can achieve payment relief by extending the grace period, or delaying payments … and avoid a nominal haircut”.

Some observers think that the debt restructuring talks will concentrate on the most relevant economic indicators for Greece, which is the ratio of gross domestic product to debt servicing costs or the debt/gross domestic product ratio. In case of the former, it would be enough to extend maturities of euro zone loans and additional grace periods for repayments in order to make debt servicing much easier. This will, however, be politically very challenging although technically rather straightforward. The review itself is expected to be a lengthy process, as it will probably involve talks with the new political leadership that will emerge from the elections. Moreover, changes are very likely due to changing economic data and outlooks as well as the results of an asset quality review of Greek banks.